The Vanishing Duck is the 112th one reel animated Tom and Jerry short, created in 1957, directed and produced by William Hanna and Joseph Barbera with music by Scott Bradley. The cartoon was animated by Lewis Marshall, Kenneth Muse, Carlo Vinci and James Escalante, with backgrounds by Robert Gentle and layouts by Richard Bickenbach. Red Coffey, June Foray and George O’Hanlon provided the voices for this film. It was released on May 2, 1958 by Metro-Goldwyn-Mayer and marks the final appearance of Quacker, who appeared in seven previous Tom and Jerry shorts. As such, The Vanishing Duck is the antepenultimate Tom and Jerry short of the Hanna and Barbera era. O’Hanlon would go on to star as the voice of George Jetson on the ABC-TV animated series, The Jetsons, also produced by Hanna-Barbera, four years later. 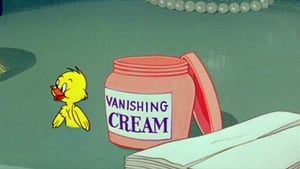