Tom and Chérie is the 94th one reel animated Tom and Jerry short, created in 1954, directed by William Hanna and Joseph Barbera and produced by Fred Quimby with music by Scott Bradley. It was the third cartoons in the Mouseketeer series of cartoons, the first of which, The Two Mouseketeers won an Academy Award, and the second, Touché, Pussy Cat! received an Academy Award nomination.

The animation was done by Irven Spence, Kenneth Muse, Ed Barge, and Lewis Marshall, this being Marshall’s first Tom and Jerry cartoon for which he received an animation credit. The backgrounds were designed by Robert Gentle and the layouts by Richard Bickenbach.The cartoon was produced in CinemaScope, a form of Widescreen, and released to theatres on September 9, 1955 by Metro-Goldwyn Mayer. 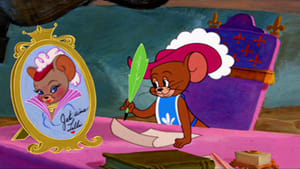