Robin Hoodwinked is the 113th one reel animated Tom and Jerry short, copyrighted in 1957 and released on June 6, 1958 after the MGM cartoon studio had effectively closed down. It was the penultimate Tom and Jerry cartoon that was directed by William Hanna and Joseph Barbera with music by Scott Bradley. It also marked the final appearance of Nibbles, who first appeared in The Milky Waif. The cartoon was animated by Kenneth Muse, Carlo Vinci, Lewis Marshall and James Escalante with backgrounds by Robert Gentle and layouts by Richard Bickenbach.

Robin Hoodwinked is reminiscent of the “Mouseketeer” cartoons, except here, Tuffy speaks in a hybrid of Saxon/Cockney English as opposed to French. 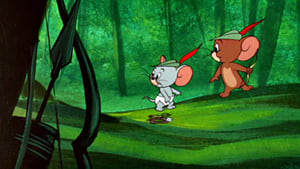