Feedin’ the Kiddie is the 107th one reel animated Tom and Jerry short, created in 1956, directed and produced by William Hanna and Joseph Barbera with music by Scott Bradley. It is a CinemaScope remake of 1948’s Academy Award winning cartoon, The Little Orphan. In other words, it is essentially the same cartoon, but shot in Widescreen, with stylised backgrounds, thicker inklines around the characters, and this time, the letter that Tuffy has was now from cousin George from Timid Tabby. Additionally, a few elements of the original cartoon are missing, notably a few seconds trimmed from the beginning of the cartoon where Jerry looks in his cupboards for food, and also, Mammy Two Shoes’ brief cameo is missing. It was released to theaters on June 7, 1957 by Metro-Goldwyn-Mayer, a month after the MGM cartoon studio shut down. 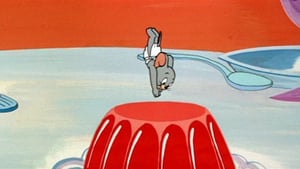