Royal Cat Nap is the 111th one-reel animated Tom and Jerry short, created in 1957 directed and produced by William Hanna and Joseph Barbera, with music by Scott Bradley. The animation was credited to Carlo Vinci, Lewis Marshall and Kenneth Muse, with backgrounds by Robert Gentle and layouts by Richard Bickenbach.

Royal Cat Nap was the last of four Mouseketeer shorts, which were a send-up of the famous Three Musketeers novel and film, beginning with the Academy Award winning short The Two Mouseketeers in 1952. The cartoon’s plot has a striking similarity to that of 1945’s Oscar winner Quiet Please!, except this cartoon features a French king who does not wish to be disturbed, rather than the former’s Spike the bulldog. It was released on 7 March 1958 by Metro-Goldwyn-Mayer. 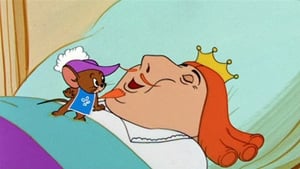