Little Quacker is a 1950 American one-reel animated cartoon and is the 47th Tom and Jerry short directed by William Hanna and Joseph Barbera and produced by Fred Quimby. It is the first Tom and Jerry short to be released in the 1950s. Little Quacker marks the debut of the eponymous character, Quacker the duckling who would go on to appear in seven more shorts, making him one of the more enduring supporting characters in the Tom and Jerry cartoon series. The voice of Quacker and his parents, along with a single WAH WAH! line by Tom, was supplied by Red Coffee; Coffee’s rendition of Quacker’s voice was mostly an impersonation of Donald Duck as performed by Clarence Nash. 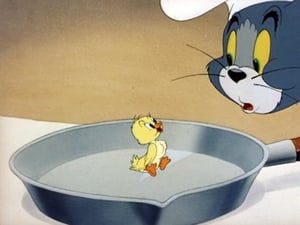