Blue Cat Blues is the 103rd one reel animated Tom and Jerry short, created in 1955, directed and produced by William Hanna and Joseph Barbera with music by Scott Bradley. The cartoon was animated by Ed Barge, Irven Spence, Lewis Marshall and Kenneth Muse, with layouts by Richard Bickenbach and backgrounds by Robert Gentle.

Unusual for a Tom and Jerry short, Jerry “speaks”, narrating the story in voiceover via Paul Frees. Since Jerry narrates through inner monologue, the short does not break the “cardinal rule” of not having Tom or Jerry physically speaking on screen. This cartoon was released on November 16, 1956 by Metro-Goldwyn-Mayer. 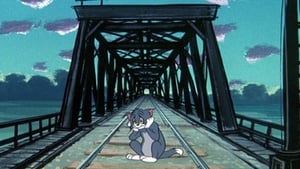