Solid Serenade is a 1946 one-reel animated cartoon and is the 26th Tom and Jerry short, produced in Technicolor and released to theatres on August 31, 1946 by Metro-Goldwyn Mayer. It was produced by Fred Quimby and directed by William Hanna and Joseph Barbera, with musical supervision by Scott Bradley, and animation by Ed Barge, Michael Lah and Kenneth Muse, with uncredited animation by Pete Burness and Ray Patterson.

Plot: Near a house is a doghouse labeled “Killer” with a dog in it. Tom pokes his head over the wall and spots a female cat in the window. Tom brings along his double bass, then wakes up Spike and neutralizes him by whacking him in the head with a mallet and tying him up. Tom uses his bass as a pogo stick to hop over to the window, stopping halfway to taunt Spike along the way.

Tom plays “Is You Is or Is You Ain’t My Baby”; the sound waves from the instrument shake Jerry’s mousehole, bouncing Jerry off the bed, then under the table, and Jerry’s head is hit by a vase that falls off the table when the mouse comes out the other side. Having had enough, the mouse gets his revenge by going into the kitchen and hurling a pie with an iron stuffed inside; the cat is angered, but continues with a few more bars. Seconds later, he is hit in the face again – this time with a pie covered in whipped cream. Spotting Jerry, Tom chases him through the house. 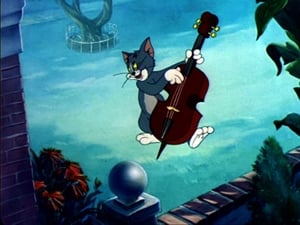