Puttin' on the Dog

Puttin’ on the Dog is a 1944 American one-reel animated cartoon and is the 16th Tom and Jerry short directed by William Hanna and Joseph Barbera and produced by Fred Quimby. It was released in theatres on 28 October 1944, by Metro-Goldwyn-Mayer. The cartoon was animated by Pete Burness, Ray Patterson, Irven Spence and Kenneth Muse, and the music was composed by Scott Bradley. The cartoon revolves around Tom’s attempts to disguise himself as a dog in order to get his hands on Jerry who is hiding from him in a dog pound. It is sometimes thought of as a sequel to The Bodyguard. 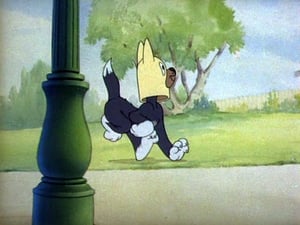