Sufferin’ Cats! is a 1942 American one-reel animated cartoon and is the 9th Tom and Jerry short. It was produced in Technicolor and released to theatres on January 16, 1943 by Metro-Goldwyn Mayer and re-released on June 4, 1949 as a reissued version. This is the final cartoon to have Clarence Nash to do meows and screeches for any MGM cat character, including Tom Cat. After this, Tom would just yelp in pain whenever he got hurt. Tom’s yelps were done by creator William Hanna. In the short’s original release, the original opening theme was “Runnin’ Wild”. It was replaced by the later Tom & Jerry theme on re-issue. On the re-issue, the animators are credited, but on the original, only William Hanna and Joseph Barbera are credited. 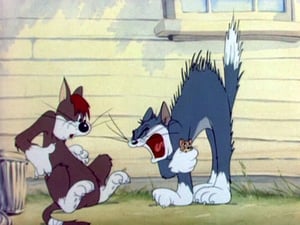