The Unshrinkable Jerry Mouse is a 1964 cartoon directed and produced by Chuck Jones. The title is a play on words on The Unsinkable Molly Brown, a popular Broadway musical that was made into a feature film, also in 1964.

The cartoon is essentially a Claude Cat and Marc Antony and Pussyfoot cartoon reworked for Tom and Jerry; most of the production staff on this cartoon had also developed those characters at Warners. Many of the gags were inspired by Warner Bros. cartoons of a similar theme to this short, such as Feline Frame-Up, Feed the Kitty, and Two’s a Crowd, which were mostly written my Michael Maltese and directed by Chuck Jones. 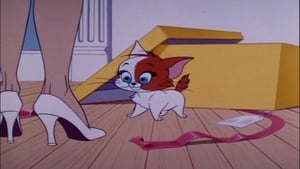